It’s not a tagline. It is our firmly held belief. Dairy milk is moot, immaterial within and to the lives, aspirations, health and eco-desires of millions.

Originally, during England’s medieval period, moots (meets) were assemblies where important points of local government were vigorously debated. In these sometimes impassioned assemblies, items that were put up for discussion were said to have been mooted. Today the word “moot” is almost always used in conjunction with the word “point.” As in “it’s a moot point” or “I wanna tell her that I love her but the point is probably moot…I wish that I had Jessie’s girl.”

Over time the meaning of the word “moot” devolved from describing a meeting for meaningful debate to a description of insubstantial pointless noise. This change followed the introduction of moot courts, in law schools.

Moot courts are sessions where law students train by arguing hypothetical cases. That is, they create and then dispute moot points. The impossibility of any substantive outcome from these hypothetical cases has led to the unimportant/irrelevant/not worth discussing meaning of “moot.”

When milkadamia declares “Moo is Moot” on our packs we are voicing the opinion of the millions who have switched out dairy foods from their diets. Dairy milk is moot, irrelevant within and to the lives, aspirations, health and eco-desires of millions.

The significant eco-cost of dairy may be more tolerated if cow’s milk was necessary. However, thousands of vegan athletes are clearly demonstrating robust health, vitality, long life and vigor don’t require dairy. That they are better in every way without diary.

They demonstrate our bones don’t crumble, nor do we suffer the protein deficiency the dairy industry attempts to scare us with. They prove that its oft-repeated claims that dairy is critical to human nutrition are false. Millions have removed dairy from their diets (billions never included it) and have happily moved on.

Eventually the dairy industry’s histrionic death throes will be a footnote in the history of our times, if even that. More than its own food production revolution, its own social movement or its own fact, plant-based diets and regenerative farming are set to be part of something much bigger, more dangerous and more important.

A righteous groundswell is building. A global eco-rights idea is taking shape. Common folk are spontaneously rising to the defense of the natural world. This is where the moral energy comes from, a sense of an interconnected natural world and natural order to rediscover, to rescue, bring back to life, to win. To live beyond simply creating no further harm, but to actively heal the harm already done.

Many, faced today with the knowledge of human-generated expansion of global eco-misery and want, are choosing to rise up and resist. To behave selflessly. We are inspired by such people whose personal choices, made for future generations, are beginning to measure at this moment in history as moral grandeur. They are mitigating as far as they are capable the impending crisis. They are active but are not motivated by activism; rather it’s an irresistible expression of their internal desire for our home.

Many are revealing humanity’s best spirit. Generations unborn may owe the opportunity to breathe a little extra humanity into the human experience, to the actions taken today. So much of what is yet to come is our choice.

To plant-based people, the lack of any possible substantive outcome from the dairy industry’s scare tactics, nutrition nonsense, bullying, lobbying, censoring of language and especially its energetic striving to continue polluting our land, water and sky, makes them, at this point of Earth’s history, the very definition of the word “moot.”

I tried your creamer for the first time this morning. My nurse practitioner recommended it for my coffee. She said it foams amazingly and is very tasty. I bought some this morning in the dairy case at Haggen foods in Woodinville Washington. I just prepared my coffee and put the macadamia in my coffee steamer/frother. She said it made amazing phone and I didn’t get any phone and it was very thin and liquidy. I tried it one more time shaking the container very very well and it was still like water. I then thought it might be my steamer, so I tried nut pods which I use all the time. It made beautiful foam! Should I return your product and get a refund? Should I try it again to make sure that it doesn’t foam?

Jo Ann, thanks for the note. Unfortunately, our creamer was not made to foam – just to perfectly mingle with coffee. We do have our latte da barista blend that foams beautifully, but that is milk not creamer. We are not sure how your nurse practitioner got it to foam, and stand a bit amazed.

I tried your creamer for the first time, and love how rich and creamy it is! I do not see any unflavored creamers listed, however. Any plans to incorporate an unflavored one for us old timers who just love the taste of coffee?
Thanks-Lisa

Absolutely! We just launched our Unsweetened Creamer. It is starting to get some distribution (we aren’t so in control of that) – mainly at natural food stores. More stores to come in 2020.

I love the butter! Great product for replacing unneeded dairy, but needed habits like buttered toast 🙂 I love that it melts and tastes fabulous! I just tried the vanilla creamer too, very yummy! I’m hooked!! Thank you for giving us such tasty options!

The ‘deadly’ food we all eat

The ‘deadly’ food we all eat
READ MORE

you, me and a macadamia tree

you, me and a macadamia tree
READ MORE

Happy Earth Day to You…

Taking on Palm and Dairy

You've successfully signed up for our newsletter. 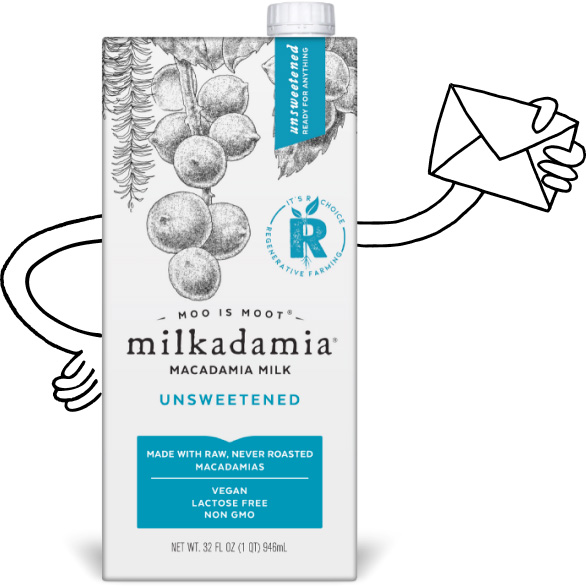 Join us, help the earth and treat yourself to a few extra glasses of milkadamia.